How does someone end up on the federal government’s “no-fly” list? You’d think the shorter, less-convoluted question would be how one avoids ending up on this list. Unfortunately, the answer to either question is a convoluted mess — one complicated unnecessarily by the number of federal agencies that think they should have a say in who lives and who flies.

Papers Please has attempted to explain the no-fly list and its parameters. And it has kind of failed, albeit through no fault of its own. The interconnectedness of government things — the wheels of which were greased with countless pieces of post-9/11 legislation, memoranda of understanding, data-sharing agreements, and the insistence of numerous agencies that they, too, were important cogs in the War on Terror Machinery — has made this almost impossible to parse.

Behold your tax dollars at work preventing you from flying: 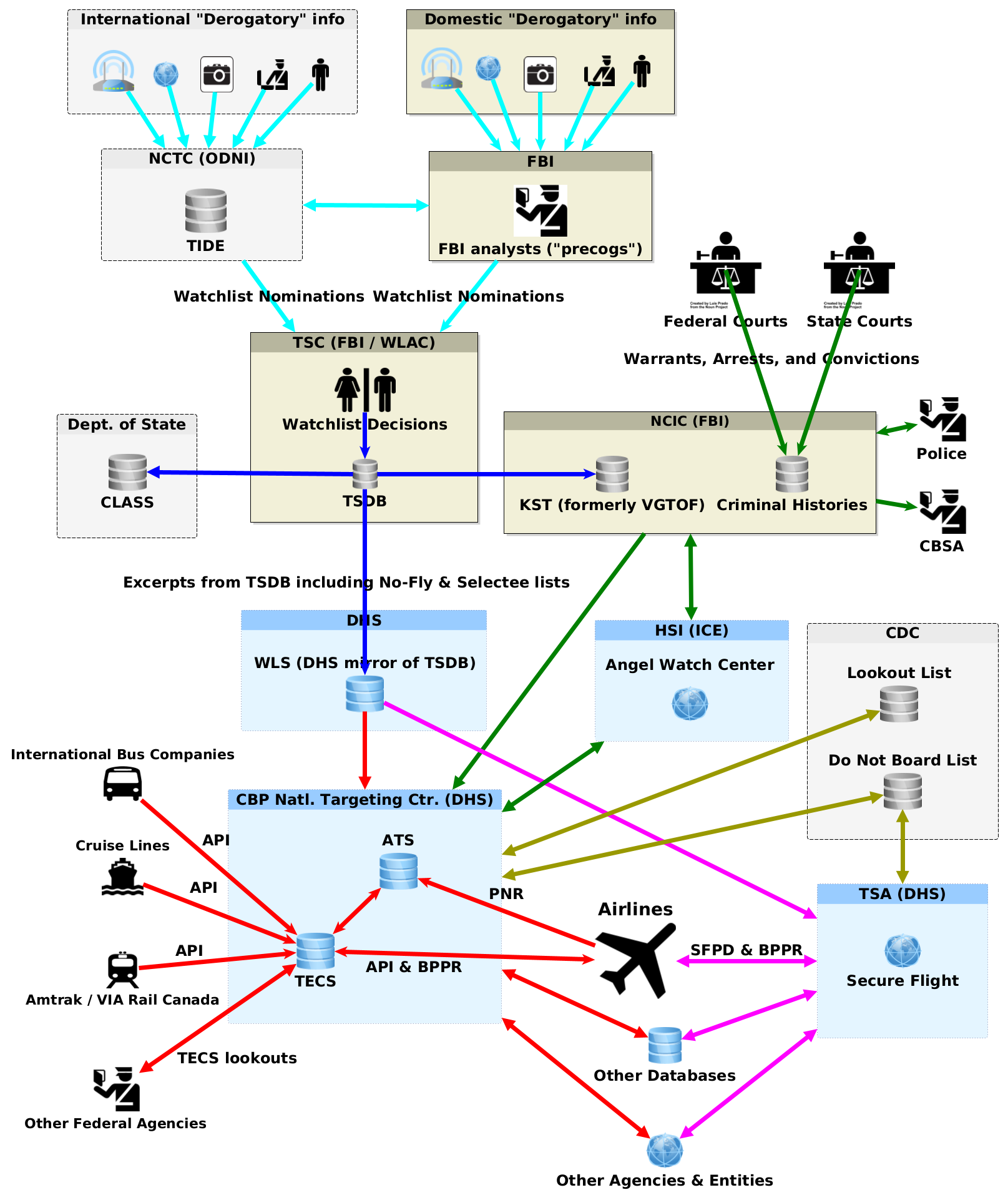 If you can’t see the embed, here’s an annotated PDF version.

There were demands — some made by the incoming President’s people — that participants in the Red Hat Insurrection should be added to the no-fly list. Bad idea. The no-fly list has been abused for years and it’s not getting any better. Courts may be coming around to the fact that arbitrary federal-level decisions with almost zero recourse isn’t what America’s all about, but if change is coming, it will be slow, expensive, and stymied constantly by invocations of the “national security” mantra.

Here are some of the facts. The FBI has used the no-fly list as leverage to turn Muslims into informants so it can more easily score empty net goals against supposed “terrorists” too poor to buy terrorist supplies and too mentally incompetent to formulate an attack plan, much less draft their own statement of ISIS allegiance.

Airlines aren’t much without passengers. So it’s in their best interest to sell as many tickets as possible and board as many people as possible. Their default assumption is everyone’s good to fly unless proven otherwise. The government has taken an opposing stance, presuming everyone guilty of latent terrorism.

[F]ly/no-fly decision-making by airlines differs from that of the U.S. government in two major ways.

First, for an airline the default is generally “Yes”, whereas for the U.S. government, as discussed above, it has been “No” since at least 2008. If you have a ticket, you look more or less alive and human, your clothing covers your “naughty bits”, and you don’t break any rules (more on that below), the airline will generally let you on the plane. You don’t (usually) have to prove that you aren’t a terrorist.

This creates friction — something exacerbated by the TSA, which operates under its own rules and has been granted considerable discretion to ground passengers and/or subject them to multiple levels of increasingly invasive screening.

If no flags fly, passengers can attempt to board a plane. But airlines are also given a lot of discretion about whom to serve — something most private companies enjoy.

Second, airline procedures generally involve a greater degree of human discretion and judgement on how to interpret and apply the fly/no-fly criteria. Airlines would say that this allows flexibility (sometimes good) but it also allows arbitrariness (bad). For better or worse, whether you are allowed to fly can depend on a gate agent’s temper and mood.

International flights further complicate matters by adding new laws and agencies to the mix. Considering what’s going on behind the scenes, it’s a miracle airlines have been able to fill planes with passengers over the last decade.

As noted earlier, placement on a no-fly list is almost impossible to challenge. The government — mainly the DHS — has argued no-fly list status isn’t something anyone’s entitled to litigate. The placement occurs without court involvement. So, the DHS apparently feels the exclusion of court review during placement demands exclusion of court review after placement. Since there’s very little court intercession, US agencies have continued to add people to no-fly lists for almost no reason at all.

Challenging no-fly status is incredibly expensive. A couple of court cases have managed to poke some holes in the government’s arbitrary groundings. But it takes deep pockets to take a lawsuit far enough that high-level courts express their concerns about the constitutionality of no-fly lists.

Only one no-fly case has gone to trial, resulting in something of a Pyrric victory: After eight years of litigation, Dr. Rahinah Ibrahim found out that she was put on the no-fly list because the FBI agent who interviewed her as part of his mosque-watching assignment misunderstood how to fill out the blacklist and watchlist “nomination” form. Dr. Ibrahim’s name was taken off that list. But her U.S. visa was revoked (despite the fact that her children were born in the U.S. and are U.S. citizens), and she hasn’t been able to return to the U.S.

Dr. Ibrahim’s pro bono lawyers incurred almost $4 million in expenses to overcome what the 9th Circuit Court of Appeals described as “scorched earth” and “bad faith” litigation tactics by the government. It took the lawyers another seven years to get paid, (finally, last month, fifteen years after they started working on the case) after the government appealed the fee award all the way to the Supreme Court.

Other cases have bubbled up to this level, but have yet to secure courtroom victories. The expenses incurred in these long-running legal battles are likely on par with this effort — one that took seven years (and more litigation) to get repaid.

All of this leads to the current situation, where irresponsible lawmakers are leveraging unprecedented actions and political animus to call for a federal level fucking of Americans who did stupid stuff and will — in many cases — end up facing federal charges.

We find it especially ironic that calls to deploy measures like extrajudicial no-fly orders are being made by politicians who profess to be those most committed to the rule of law. The current no-fly system, as should be apparent from the description above, is the antitheses of the rule of law, and epitomizes the lawlessness of the DHS in particular.

Does everyone convicted of a crime belong on the no-fly list? If so, for how long after their conviction? What about people suspected or accused of crimes? And why shouldn’t these decisions be made by judges?

Why should we focus on air travel, anyway? Surely those who came to Washington by air were less likely to have brought firearms or explosives than those who came by car.

The no-fly list should not be an all-purpose weapon to be deployed against anyone who’s acted irresponsibly and/or criminally. The no-fly list probably shouldn’t be used at all against anyone, but if it is going to remain active, it should only target known terrorists the government can definitively show would endanger the nation if they were allowed to fly. The list should be short and targeted. Instead, it’s become a catchall for everyone the government is unsure of, as well as a receptacle for Muslims the government failed to turn into informants. Adding alleged domestic terrorists to the list is unwise, as most of those raiding the Capitol committed crimes of opportunity, rather than premeditated acts of terror.

Papers Please has made an admirable attempt to explain the no-fly list and how it operates. But much of its underlying legal rationale remains obscured, buried by national security invocations and unjustified claims that explaining the system would somehow allow people to avoid it. It’s an unavoidable — and mostly unchallengeable — part of American life at this point. And it’s never going to get better if opportunistic politicians continue to believe it’s something necessary to secure the nation against all threats domestic and foreign.