Investigative reporter/FOIA terrorist Jason Leopold has been suing the US government for a while now, trying to get access to the full Robert Mueller special counsel report investigating President Trump’s alleged ties to Russia. While a version of the report has been released, it was heavily redacted, sometimes in important areas. Leopold and Buzzfeed are seeking the report along with additional interview details, emails, memos, letters, and charts used by Mueller’s office in preparing it. Not surprisingly, the DOJ has been fighting this.

Then, on October 6th, Trump announced on Twitter (naturally) that he had “fully authorized the total declassification of any & all documents” regarding the investigation: 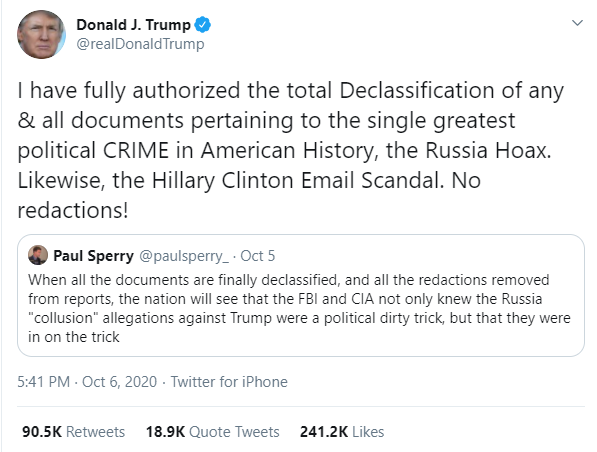 About 40 minutes later, he tweeted that “all Russia Hoax Scandal information was Declassified by me long ago. Unfortunately for our Country, people have acted very slowly”: 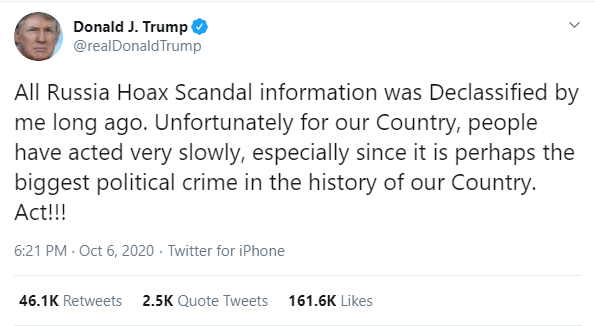 That put the DOJ in a bit of a bind, because it had been saying in the lawsuit that it couldn’t reveal this classified information. Leopold and his lawyers quickly filed an emergency motion, pointing out that the President had now declassified this information, and thus the DOJ no longer had any excuse to withhold it:

On October 6, 2020, the President of the United States directed that all documents
pertaining to investigations into Russian interference in the 2016 election, which includes the
Mueller investigation, be released to the public, and stated that he had, in fact, previously ordered
this be done. Twitter, @realDonaldTrump, Oct. 6, 2020 at 8:41pm (“I have fully authorized the
total Declassification of any & all documents pertaining to the single greatest political CRIME in
American History, the Russia Hoax. Likewise, the Hillary Clinton Email Scandal. No
redactions!”); Twitter, @realDonaldTrump, Oct. 6, 2020 at 9:21pm (“All Russia Hoax Scandal
information was Declassified by me long ago. Unfortunately for our Country, people have acted
very slowly, especially since it is perhaps the biggest political crime in the history of our Country.
Act!!!”) (attached as Group Exhibit A). As a result, (1) Exemption 1 no longer applies because
the records are no longer classified, and (2) any FOIA exemptions have been waived with the
exception of disclosures prohibited by the Privacy Act, Rule 6(e), or other statutes that prohibit
release.

As a result, Plaintiffs ask the Court to order the government to reprocess the 302s to remove
all redactions or withholdings based on Exemption 1 or any discretionary exemptions like
Exemption 5, by October 28, 2020. This should be a simple process that requires no independent
analysis or consultation beyond simply reviewing which exemptions were asserted and removing
the applicable redactions based solely on which exemption claimed.

It should be noted here (and this is kind of important) that the President of the United States has total freedom to declassify anything on his own whims at any time. And these tweets sure looked like him doing exactly that.

There is no basis to require the Federal Bureau of Investigation (“FBI”) to reprocess over
4,000 pages of FD-302s from the Special Counsel’s investigation into Russian interference in the
2016 Presidential election by October 28. The President’s recent statements on Twitter referencing
the “declassification” of information were not an order to the Department of Justice (the
“Department” or “DOJ”) to declassify the materials in this case…. The Twitter statements do not constitute a self-executing declassification
order. …

Oh really? The declaration from the Deputy Attorney General Bradley Weinsheimer basically says that White House lawyers told them to ignore the tweets.

As concerns the above-referenced tweets from the President, the Department has not received a declassification order from the President related to the materials at issue in this or any other FOIA case. After the President issued his statements on Twitter, I and other Department officials consulted with the White House Counsel’s Office about the matters discussed in those statements, including potential declassification of documents related to the Russia Investigation and Hillary Clinton’s emails, and whether the Twitter statements were meant as an order to alter any redactions that have already been taken on any materials in this case and other FOIA cases. The purpose of this consultation was to obtain the official position of the White House regarding the meaning and effect of the President’s statements.

In other words, the DOJ is saying that it can’t actually follow the plain language of the President’s own tweets, and must check with the White House’s lawyers to ask “did he really mean that?”

So: we’re just ignoring what the President tweeted because we want to.

Leopold and Buzzfeed have since responded by pointing out that the President regularly makes decrees by Twitter, and that those are him “conducting official business.” The DOJ can’t just ignore that:

or the last three years and nine months, the President has governed this country by
tweet. The President has stipulated that he uses Twitter “to announce, describe, and defend his
policies; to promote his Administration’s legislative agenda; to announce official decisions; to
engage with foreign political leaders; [and] to publicize state visits.” Knight First Amendment
Inst. at Columbia Univ. v. Trump, 928 F.3d 226, 231-32 (2d Cir. 2019) (emphasis added). His
administration describes the President’s Twitter account as “one of the White House’s main
vehicles for conducting official business” and his tweets are “official statements of the
President.” Id. at 232. He has even used his tweets to make “official” “legal notice” to
Congress. Donald J. Trump (@realDonaldTrump), Twitter (Jan. 5, 2020, 2:25 PM), available at
https://twitter.com/realdonaldtrump/status/1213919480574812160 (notifying Congress the
United States “will quickly & fully strike back, & perhaps in a disproportionate manner,” should
Iran attack any U.S. target).

It is not at all surprising, therefore, that the President would use Twitter as the means by
which he would declassify records and waive FOIA exemptions on behalf of the Executive
Branch over which is holds Constitutional authority. Indeed, it would be surprising if he did so
by any other means. The Court should reject the Government’s back-pedaling and order DOJ to
comply with the President’s clear directive to declassify and remove redactions from the
narrative FD-302 forms responsive to Plaintiffs’ FOIA requests. And if the Court requires any
clarity beyond the President’s unequivocal tweets, it should direct the Office of White House
Counsel to appear at the hearing scheduled for Friday.

The filing further notes that there is no rule that declassification can’t come by tweet or has to take a special form. If the President says something is declassified it is declassified.

There is nothing in the Constitution,
Executive Order 13,526, or otherwise that prohibits a president from declassifying records in
whatever way and through whatever form of communication the president sees fit. Thus, an
official presidential tweet stating “I have fully authorized the total Declassification of any & all
documents pertaining to the single greatest political CRIME in American History, the Russia
Hoax. . . . No redactions!” is more than sufficient to exercise that Constitutional authority. The
government offers nothing indicating that the President did not mean exactly what he said or that
he lacked the Constitutional authority to do what he has done. Instead, it claims that Plaintiffs
“have pointed to no order declassifying the documents at issue in this case,” ECF No. 107 at 4,
which is plainly wrong: the tweet is the order, and it came in an official statement directly from
the President himself.

The filing also notes that what the White House counsel thinks doesn’t matter. The only one who matters here is the President himself:

The Weinsheimer declaration does not support the government’s position, and in fact
supports Plaintiffs’. As the declaration makes clear, the question is whether the tweets were
“meant as an order to alter any redactions that have already been taken on any materials in this
case and other cases.” …. But the declaration makes clear
that neither the DOJ nor the White House Counsel’s Office actually attempted to get an answer
to that question from the only person who can definitively answer it: the President. Instead, they
sought, apparently without actually asking the President, to determine whether the President
issued some further “self-executing declassification order” beyond the tweets and somehow
concluded that the President merely “authorized the Attorney General to declassify documents as
part of his ongoing review of intelligence activities relating to the 2016 Presidential election and
certain related matters.”…. But the President himself has already made clear that this
interpretation of his intent is wrong: he clearly stated in an official presidential communication
that this same material “was Declassified by me long ago,” but “people have acted very slowly.”

This morning, in a hearing before Judge Reggie Walton (who is not known for being happy when the government plays games in front of him), it appears that Leopold’s argument is absolutely winning the day. Walton told the DOJ that Trump’s tweets seem pretty clear and he doesn’t see how they can argue he didn’t declassify stuff. He also seemed perturbed that no one actually asked the President what he meant, and postponed the rest of the hearing to tell the DOJ to go ask the President if he actually meant what he tweeted:

Judge Walton continues this hearing until next week. He specifically wants govt atty to get WH counsel to speak to Trump and find out intent of his declassification tweets and submit with the court

Of course, it now seems likely that the White House lawyers and the DOJ will very carefully explain to the President why they want him to say he didn’t mean what he clearly said, potentially allowing him to walk back his fairly unequivocal statements. At the very least, though, that should enable reporters to question the President further on why he falsely claimed to have declassified stuff. At the end of the day, either all of the documents have been declassified or the President will need to admit that he lied about declassifying them.